So you might think that in Texas, lots of days would be ideal for just hanging around in a hammock. I mean, we get some pretty good weather year round and plenty of sun, but the reality is that there’s really only a few times a year that I think, wow, I have to take time out and get out there and just kick back in the hammock. The temp, the breeze, the humidity … it has to be right for me to want to [ideally] snooze in the hammock.

Today was one of those days.

At mid afternoon we had temps in the low to mid 80s and a light and occasional breeze that was just about perfect.

As I lay there gazing up into the Live Oak above me I was treated to some visitors. First came the woodpecker. Hard for me to tell what kind. It was very animated and jumping from branch to branch and pecking away. It appeared to have plenty to feast upon. 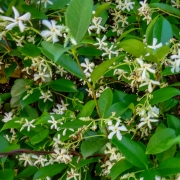 Then came the hummingbird that swooped in out of nowhere. Without the motion of its arrival I would never even have noticed it. At best, it was only 2 to 3 inches tall and once it lighted, it hung out on a branch for quite some time. It was practically invisible without the movement of flight.

The other visitor I noticed was a lizard shooting up the same tree. Again, hard to tell exactly what kind but there are so many Texas Spiny Lizards around here that’s likely to be the case in this instance too.

This warm and restful moment was accompanied by the scent of Star Jasmine. (see pic) My neighbor has some planted and over the years this vining plant has taken over a rock wall nearby. There’s nothing more evocative of late April and early May for me than this scent. It blooms in places around the city and central Texas and when I catch a whiff I just have to stop for a moment. It’s imprinted on me and as memorable as Lilacs, Bluebonnets and Easter Lilies. 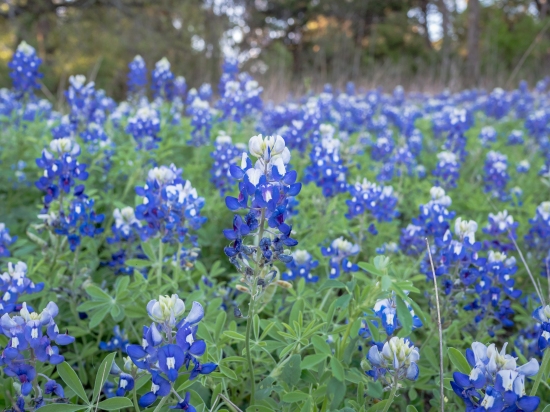 I mentioned the Bluebonnets in the last post so I’d be remiss if I didn’t post an obligatory shot of the Bluebonnets this year. We’ve gotten rain at the right times throughout the fall and through the winter and early spring and this year we’re seeing a bumper crop of Bluebonnets and other wildflowers.

I took this one just in the last hour or so on a walk at the end of the day. As you can see by the bit of light hitting the trees in the background it was before sunset but not by much.

I liked how this shot turned out. I captured one main Bluebonnet up front and in focus while you still get some perspective of how prolific the flowers have been this spring. There wasn’t much light left but – enough.

As you can see by the big grin on my face in the photo below our weather in central Texas has finally felt a bit more like fall in recent weeks. And that means that I can cycle at something other than the crack of dawn (or at least pretty early in the morning) to avoid the oppressive Texas heat.

While this particular bike ride in the photo was out in the Texas hill country earlier in October we’ve generally had some pretty good weekends for cycling throughout October. While I’ve backdated this post I’m actually writing this toward the end of October on the 29th. This weekend and particularly today, the 29th, was superb for getting outdoors and cycling. I did a city ride of around 24 miles today and it was a perfect day to be out. As I write this the day finishes with mid 70s and abundant sun. You gotta love fall weather in Texas.