The bike tour I mentioned in an earlier post is now over and I’m back at home.

The brief recap: the tour had us cycling from Venice (actually very near Venice in the smaller outer town of Mira) to Konstanz, Germany. We headed north through Italy to Austria and then on to Germany.

If you only read this far, let me just say it was a wonderful bike tour through northern Italy and into Austria and Germany punctuated by just about every emotion you might want from a bicycle tour. From the exhilaration of descending mountain passes on winding roads in wonderful weather, to quiet scenic roads, to struggling up mountain passes when the wind was against you and it was starting to rain, to full on down-pouring rain, to some white-knuckled rides in what seemed to me to be some highly trafficked roads. Oh, and those dark tunnels… So, just about perfect! Just the diversion desired.

I typically have high hopes that I’m gonna post something here every day of such a bike tour but that ends up just not very practical. For one I tend to spend a fair bit of time digging through photos and finding links to things when I post and there’s just not time for that. I could adopt a different strategy and just make posts very short and sweet but I use Facebook and Instagram for that sort of stuff. The other primary reason is I’m just preoccupied. When you’re not cycling you’re either prepping to cycle or just enjoying yourself after cycling or with other tour participants.

And then practically, the wifi often sucks at many hotels and uploading photos or otherwise using the internet is marginal at best.

So, I’m gonna try to just summarize and then follow up with some other posts. Let’s see if I can get at least that accomplished.

See the map to get a better idea of the route covered:

This comes from combined Garmin data over 10 days of riding. If my Garmin data is reasonably accurate, we covered 462 miles and approx 42,500 feet of elevation (amount climbed in aggregate). Those are the major aggregate stats. Some days were harder than others based on factors of the day – heat, rain, steep climbs.

As you can see from the following elevation profile over the 462 miles, we climbed slow but sure from the coast of Italy and into the Dolomites. Those spikes in the overall profile were mountain passes we did along the way. It may not look like much in this context. Those spikes were a lot of work. 🙂

What would a visit to Italy be without some good wine?

Right from the start, and particularly toward the end of the first day of riding we began to see vineyards. That first day’s route took us from from Mira to San Pietro di Barbozza. The photo below was taken from the hotel stay at the end of the ride. Beautiful wine country and home of very good Prosecco (sparkling) wines from the Valdobbiadene region. (DOCG wine designation.)

The forecast on that 1st real day of riding was for rain. Ugh! And not just rain but ‘thunderstorms’. But we (or rather, many of us) managed to avoid the rain on that day. The route was pretty flat and 86K so we made hay while the sun shined and even with a stop for lunch in one of the small towns along the way we were in by 1:30pm. But not 20 minutes later, I looked out and saw that the rain had started. And then it just unloaded and came down in buckets. Some folks on the ride got drenched. Not only was there a lot of rain, but the wind picked up and it became a raging storm for at least an hour.

That kind of rain forecast pretty much stuck with us for the entire 2 weeks. It might rain overnight or early and then there would be dry (enough) weather to take off and ride for most of the day. But by afternoon, there would be rain again. If you timed things right, you could miss the big rains. 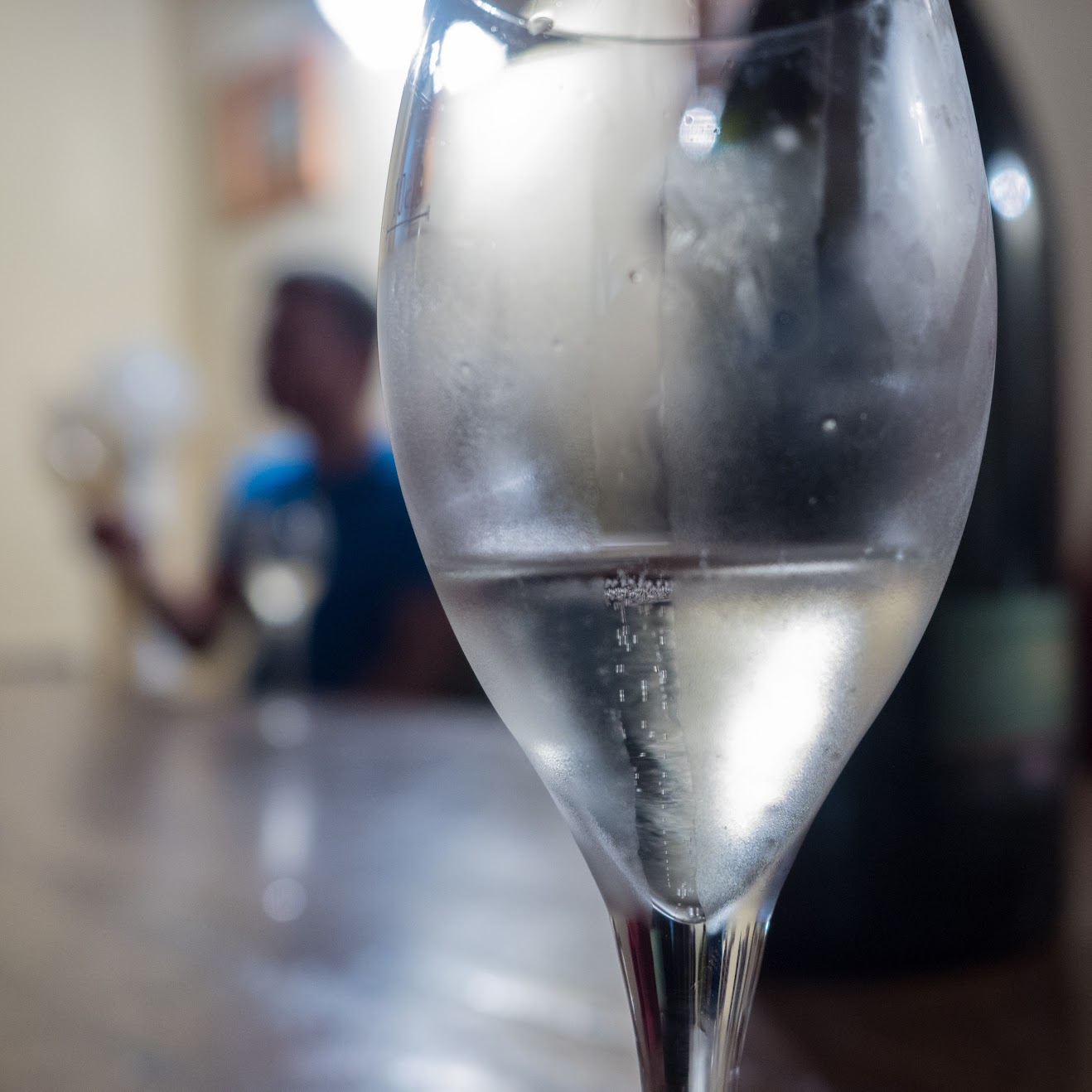 Late in the day of that 1st day of riding the rain subsided and we walked to a tasting of some excellent Prosecco wines (a Brut, a Very Dry and a Dry). Suffice to say they were all very good but I was more fond of the first two. The 3rd starting to be just a little too sweet for my taste.

As we walked to dinner that evening at Trattoria alla Cima it started to rain again and by the time we were seated at the restaurant it was a raging storm again. Dinner though was top notch and just a ton of food. There was a plate of starters and then a course of pasta with mushrooms, followed by a course of wonderfully done beef with potatoes, eggplant and zucchini. I was stuffed after all that (I had seconds on the pasta!) but of course had to try some of the Tiramisu for dessert. It’s a good thing we had ridden 86K.

There would be other wine and great food along the way and not surprisingly the cycling made for good appetites and the freedom to eat whatever we wanted along the way.

It didn’t take long in the tour for the terrain to become much hillier and mountainous. That made for spectacular scenery and some choice mountain passes.

The photo you see here is from very early on in my climb up Passo Falzarego from Cortina, Italy. We have only just begun the climb but the views are great! The town you see in the valley in the photo is Cortina. Click through the links for more insights on both of these.

We woke to fantastic weather the morning we rode up the Falzarego pass. Nice temps and little chance of rain. An excellent day to make the climb.

You’ll find alongside a couple photos of me during the climb as well as at the top.

In my experience you need to bring enough gear and layers to account for both heat and cold and possibly wet weather. You can see here I’m wearing a jacket. Near and at the top, it was chilly! A key reason I have a rack on the back of my bike is to stow the extra layers.

On the climb up we were really sweating but with the temp plus the humidity early in the ride I could see my breath as I huffed and puffed up the climb.

At the top I donned leg warmers and thicker gloves for the descent. Without the jacket and other gear you can get really cold on these long descents at high altitude. Your hands can easily go numb since you’re constantly gripping the brakes and your hands are cold anyway.

It’s always nice to find a little bar/cafe at the top of such climbs. In this case I went in and had a coffee and a bottle of water. The tour guides in both cases took these pictures of me. They were also very conveniently along the route for refill of water — though on this particular climb there were places that would have been easy to stop for that.

There were other days of big climbs that followed. Not least of which was a couple of days later when we did a loop ride out of Corvara. We did 4 mountain passes that day: Gardena, Sella, Pordoi and Campolongo. Regarding the links, I think I have the directions correct for which way we went up the passes.

I already posted some pics and notes from that day in a Facebook album so I won’t repeat here. Click thru the link for more of that day.

What turned out to be the most challenging climb of the tour for me – and the group, judging by the sentiments expressed after the ride – was the day we climbed the Hahntennjoch pass in Austria.

I’ve included here the result of the Garmin data from that day. We spent the morning riding a pleasant bike route along the Inn River. Generally the morning was a flat route though we did have some wind in our face that day and it was warming up fast. By the time we’d covered 40 miles and stopped for a bite of lunch, it was getting just plain hot. The lunch break in Imst was helpful though for the calories because even before you leave the town you begin to climb and it gets steep right away. And then you climb for about 9 miles. As you can see in the speed graph, my pace really slowed down! Click for a more detailed climb profile.

The climb was steep and toward the top it began to rain and the wind picked up more. As you can see in the temperature graph in the image the temp really dropped as I approached the top. The Garmin recorded 50s (F) but it sure seemed chillier than that. But … wind and some rain.

Finally at the top, the descent down to the small town of Elmen was fantastic. At one point as we came out of the switchbacks I stopped to take a photo. (My bike is facing the opposite way I’m descending. You can see the road up ahead down below my vantage in the pic.)

Aside from myself and a guy from Hong Kong, all the tour participants were from Australia. The tour idea originated from AllTrails in Australia hence the group dynamics.

You often spend breakfast, lunch and dinner with folks on such a tour so it’s great when you find folks you can easily get along with for that much time.

I tended to spend the most time with the three guys in the photo here. We rode at a close enough pace to one another that typically at coffee stops and lunch stops we’d grab a table together. From left to right in the pic: Antony (who took the photo — it was bright out so I think he’s struggling to see he’s got this photo framed right), then me, Peter, and Jeff. The waitress was a surprise addition to the photo since we were all looking the other way and she seemed to get a kick out of it.

We often ended up at dinner at the same table too. Antony was a wine fan and so we often went in halves on a wine for dinner.

From the left (and more for my memory than for you the reader) : Bob (from Tasmania), Lisa (tour guide), Jeff, Richard (owner/operator of AllTrails), Antony, me, Jo (married to Richard), Di, Peter, Jan, Mary, Tana (married to Bob), Barry, Percy (from Hong Kong).

Only three of us (Antony, me and Percy) signed up for just the 1st half of the tour to Konstanz. Everyone else (plus a rider that only joined the 2nd half) continued on to ride all the way to Paris.

I’ll finish this section with one last photo of the usual suspects taken by Antony. Half the fun of these group bike tours is after all the hard work of cycling you clean up and spend time socializing with the other folks on the ride. Stories of the day. Politics. The locals or tourists walking by. You name it, we probably talked about it. This shot was taken in the old town and after arrival in Innsbruck on a particularly warm day. We had to stay hydrated of course …